Calif. Teamsters out in force against Prop 32

Hundreds of Teamsters rallied yesterday against Proposition 32, the heinous ballot question that would take away workers' rights to political speech.

Dubbed the "Billionaires' Bill of Rights," the campaign for Prop. 32 receives millions in support from the super-rich, including $4 million from the Koch brothers.

Teamsters already registered more than 25,000 new voters from their ranks -- roughly 10 percent of the entire Teamster membership in California. 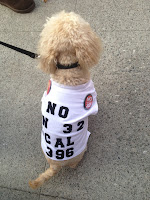 (Even Teamster puppies are fighting against Prop. 32.)

This weekend's rallies were aimed at mobilizing Teamsters who will receive absentee ballots this week.

Teamsters General President Jim Hoffa traveled to Los Angeles and San Jose to urge his brothers and sisters to fight hard against the attack on workers. A press release tells us,


"Proposition 32 is an attack on union workers by the same anti-union, corporate special interests that have waged war against organized labor across the country since the beginning of 2011,” Hoffa said. “Everything that Prop. 32 represents must be defeated here and now – California is the frontline of this battle. If we allow this anti-worker measure to go forward, it could spread across the country, further weakening our middle class.”


Prop. 32, at its core, is an attack on workers, plain and simple. Prop. 32’s supporters disguised their attack as a ‘reform’ measure, but everyone from major newspaper editorial boards to good-government groups all agree that Prop 32 is not at all what it seems. (Cammack is also president of Joint Council 42 in Southern California.)

Posted by Teamster Power at 8:21 AM