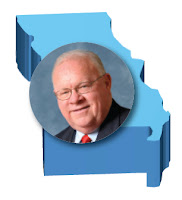 We're paying close attention to 19 political candidates who are Teamsters, used to be Teamsters or are close Teamster friends. Between now and Nov. 6, we'll be presenting one candidate a day to you, courtesy of Teamster Magazine. Read about other Teamster candidates here,here, here and here.

Bob Burns, a 34-year Teamster, retired after a career as a beer truck driver and was a longtime member of Local 600 in St. Louis. Burns, a Democrat, is seeking the District 93 seat and will face a Republican who ran opposed in the primary election. After retiring as a driver, Burns worked for Congressman Dick Gephardt and U.S. Sen. Claire McCaskill as their union representative.

Missouri residents defeated right-to-work legislation at the ballot box in 1978, “but it keeps rearing its ugly head.”

“I’m going to Jefferson City to kill it once and for all,” said Burns, who is making his second run for the state House. He said he will fight for good paying jobs with protections for workers, great schools for children and access to affordable health care.

“Everything I have I owe to the Teamsters,” said Burns, who was elected and served as alderman in the city of St. George on the Affton School District Board of Education.

Posted by Teamster Power at 7:46 AM