Calif. Teamsters register 23K voters in 'No On 32' campaign

How about a shoutout to our brothers and sisters in California who registered 23,000 new voters! They did it as part of their campaign to defeat the Billionaires' Bill of Rights, otherwise known as Proposition 32.

Brother Doug Bloch from Joint Council 7 in San Francisco tells us how they did it. (We're cross-posting from the California Labor Fed):


California Teamsters began our No on 32 campaign with two kickoffs in April and July.  The April kickoff, sponsored by Joint Council 42, drew over 1,400 Teamsters from Southern California.  Then in July, Joint Council 7 brought together over 800 members from Bakersfield all the way up to the Oregon border.  Members were educated about the dangers of Proposition 32 and armed with voter registration cards. 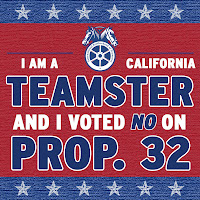 Business Agents, stewards, and volunteers got to work.  Then in September, over 40 members came off the truck statewide to kick our program into high gear.  This lost-timer program was supported by our members’ own contributions.

Joint Council 7 took a caravan of Teamster trucks to blitz our worksites.  We started out in Bakersfield and worked our way up to Stockton, down through the Bay Area out to Watsonville, and doubled back to Sacramento.  In the end, we hit 33 worksites in 21 days and spoke to over 3,000 members.  At many stops in the caravan, we were joined by Teamster-supported candidates and elected officials, but the focus was on our members.

In Southern California, Joint Council 42 sent a squadron of 25 rank-and-file members to blitz worksites from San Diego to Santa Barbara in an aggressive program that touched thousands of members.

Teamsters General President James Hoffa also barnstormed the state, making several stops along the way in Southern and Northern California.  We did our first ever California membership conference call, drawing over 19,000 participants to a call with President Hoffa.

When the smoke cleared, we registered over 23,000 Teamsters to vote statewide – a 10% increase in our overall membership.  Over 90% of the registrations were vote by mail.  Now we join our brothers and sisters to GET OUT THE VOTE!