How the Kochs' massive oil theft led to Citizens United

Investigative journalist Greg Palast describes how Koch Oil drivers filled their trucks with oil from the Osage Indian Reservation but shortchanged the tribe by several hundred dollars a load. The FBI investigated and found Charles Koch personally ordered the multimillion-dollar pilfering of oil. He was on tape saying,


I want my fair share and that's all of it.

Koch Oil was investigated by Congress, which found,


Koch Oil (“Koch”)... is the most dramatic example of an oil company stealing by deliberate mismeasurement and fraudulent reporting.

Koch Oil was charged by a federal grand jury and fined. But here's how the brothers managed to weasel out of further prosecution: The federal prosecutor serves at the pleasure of the state's U.S. senator. Oklahoma Sen. Don Nickles had accepted campaign contributions from the Koch brothers, so he had a Koch-friendly prosecutor appointed, according to Palast. That prosecutor assured Charles Koch he wouldn't be indicted.

The Kochs were then charged with 350 criminal violations of federal environmental laws, according to Palast. That's because Koch Oil drivers dumped oil sludge in the rivers after skimming the oil.

The Kochs decided to decriminalize environmental violations. Palast says in 1994 they wrote the Contract With America, which attacks environmental protections. The Kochs that year contributed heavily to Republican congressional campaigns. They helped unseat 25 Democrats during the 1994 midterm elections, which is why Newt Gingrich came to power. 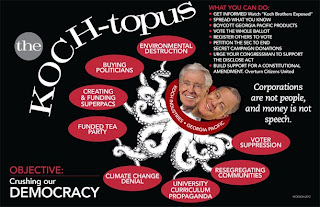 Palast describes how the Kochs laundered money through a management consulting firm called Triad and a shell nonprofit called Coalition for Our Children's Future. They spent millions smearing Democratic candidates for Congress. This was a federal crime at the time.

But no longer, not since the Supreme Court's Citizens United decision. And guess whose lackey lawyer argued the case? That would be the Koch brothers' lawyer, Ted Olsen.