This guy can probably get a job on Fox News or working for Mitt Romney. He's a hedge fund analyst and consultant to Christopher R. Wight, the Republican candidate for the U.S. House from New York’s 12th Congressional District. His name is Shashank Tripathi and he spreads lies under his Twitter handle @ComfortablySmug.

Many would consider him a sociopath.

Yesterday this was the kind of crap he was tweeting: 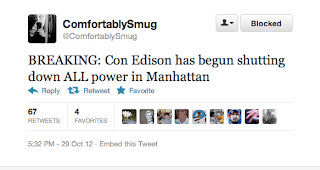 He also tweeted that the MTA announced all subways were flooded. He claimed the New York Stock Exchange had three feet of water on the floor.

Unfortunately, his tweets were picked up by news outlets before they were debunked.

He's been doing this for several years, in the comfort of anonymity. But today, Jack Stuef at BuzzFeed outed him as Tripathi:


When I called Tripathi and introduced myself, he immediately hung up.  @comfortablysmug did not respond to a DM request for comment. Wight could not immediately be reached for comment. Jordan Terry, founder of hedge fund consultancy Stone Street Partners, whose blog @comfortablysmug links to in his Twitter profile, said “Smug” no longer writes for the blog, but Terry had “otherwise no comment” on Tripathi.

Since the controversy last night, @comfortablysmug has not tweeted.