Sandy clean-up: It's a tough job, and Teamsters are doing it

Parts of the Northeast are returning to normal today as Teamsters clear trees, repair rail tracks, clean up after flood damage, ship supplies and deliver those all-important iPhones and QVC purchases.

Two airports and the New York Stock Exchange reopened, and some Amtrak service was restored along the Northeast Corridor. But in hard-hit New Jersey, the National Guard is still looking for flood victims, fires are still burning and entire neighborhoods are buried under sand and seawater. Millions are without power as far away as Michigan, and 29 inches of snow fell on western Maryland.

None of that stopped our brothers and sisters from getting 'er done at departments of public works and sanitation, the railroads and UPS. We relied on Twitter and Facebook to tell us how hard they're working up an down the coast. In the process, we found lots of appreciation for the DPW, sanitation and UPS Teamsters doing their job.

(We know we've left off plenty of hardworking Teamsters, but we hope to get to you as the clean-up continue.)

Brother Dan Battistelli tells us Local 633 Teamsters who work for True Value are busy. "Up here in N.H. We've been pulling orders, shipping and driving trailers all across New England (full) of generators, batteries, flashlights etc."

Local 25 Teamsters who work for the Cambridge, Mass., DPW are quickly clearing trees and removing debris as an appreciative city watches. Pardis Saffari tweeted a thank you to the Cambridge DPW with the message, "You guys are great."

A tweeter by the handle of ‏@zenkenobi tweeted:


Cambridge DPW have been amazing the last couple days. I salute those guys in the orange trucks. #sandy #cambridgeMA

And props were tweeted out to UPS from Phender Phlair in Franklin, Mass., who called UPS "heroic."
One New Yorker could hardly believe UPS even delivered during the superstorm:


@nyprdiva: So my doorbell just rang and it was @UPS with a package...seriously?

Calolo Martin tweeted this black-and-white photo of Yonkers DPW Teamsters taking care of a fallen tree. We know from Facebook they were all out yesterday. 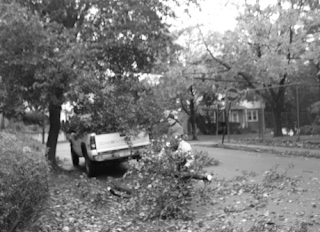 The New York City sanitation department is being singled out for praise in the tweetosphere. Here is a sampling of tweets:

Allison ‏@MonomaniacAL:
Thank you to all the NYC Government staff servicing the city today including sanitation workers on 12 hour shifts clearing debris #Sandy

@MainaNYC: Seeing all departments out there #nypd #fdny #coned #dsny working to clean this mess up. Thank you #nyc #sandy

Posted by Teamster Power at 2:38 PM