They leafleted at the PhotoPlus Expo in front of the Javits Center, telling attendees they'll have long waits for camera repairs. Canon is forcing its customers to send DSLR cameras to an out-of-state facility -- and eliminating repair technicians' jobs represented by Teamsters Local 210.

Customers have reason to be unhappy with the move. One customer called Canon's customer service "disastrously unreliable," according to the press release.

Another said it was "an expensive disappointment."

Until recently, New York photographers could drop off their Canon equipment at local repair shops and get quick, reliable service. Often they got same-day turnaround.

Nikon owners can still choose between 20 authorized repair shops across the country, including in New York City. 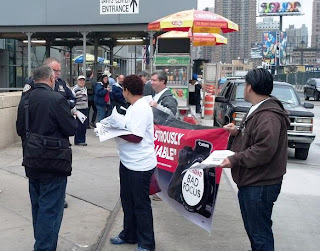 
Canon customers are free to choose between independent local service and Canon, according to their needs and convenience. This discrimination against American customers is unacceptable.

As Canon and Nikon square off in the Photo Expo and in the market place, growing numbers of photographers are signing an appeal to demand that Canon rescind its current repair policy and restore photographers’ access to authorized independent local repair service.
Posted by Teamster Power at 4:48 PM