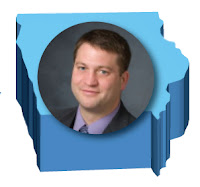 Iowa State Senator Steve Sodders represents District 22 in Iowa and serves as the Deputy Sheriff for Marshall County. Today, he is running for Iowa Senate District 36.

As a Teamster, Sodders is also an active member of the Iowa Teamsters Law Enforcement League. His Teamster experience has helped him represent working families in the state and lead on the issues that matter to them.

“It’s been a great experience working with the Teamsters Law Enforcement League,” Sodders said. “It has taught me that organization matters and it’s given me leadership skills that helped me in the Iowa Senate.”

Sodders is committed to pushing for initiatives that improve worker training opportunities and job placement for the unemployed.

Posted by Teamster Power at 1:36 PM