Legal challenge to RTW-for-less in Ind. gets go-ahead 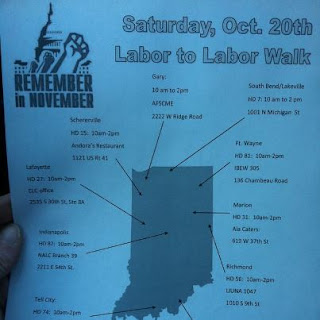 Here's some good news from the Post-Tribune:

The suit claims that the law violates the state constitution by requiring unions to represent workers who are receiving union benefits without contributing to the costs. Article 1, Section 21, of the Indiana constitution reads, “No person’s particular services shall be demanded, without just compensation.” Along with the United Steelworkers, USW District 7 President Jim Robinson and five local union presidents are plaintiffs in the suit.

Feelings still run high since working people lost the battle in February to preserve their right to bargain collectively. The Muncie Free Press reports early voting is surging in Indiana:


One group, the Indiana State Building Trades, is launching a statewide campaign to get out an early vote and defeat Republican Mike Pence after Republican lawmakers and Gov, Mitch Daniels passed a Right to Work law that no longer requires worker to join a union.

Joe Watkins, a business agent for Laborers International Union Local 1112, said dozens of workers had been helping register and now get out an early vote after the RTW passage...

The Indiana AFL-CIO is encouraging union members to get out the vote in November on the Stand Up For Hoosiers Facebook page:


Imagine what the other side would say if 500 union members & their families were out knocking doors of other union members across the state reminding them about this election & the candidates that support working families.

Just imagine.
Posted by Teamster Power at 10:12 AM