E. Coast Teamsters in the eye of the Superstorm

Some East Coast Teamsters are lucky enough to be hunkered down at home while others are keeping citizens safe and provisioned as Hurricane Sandy bears down on the Northeast.

President Obama declared a state of emergency in New York and Massachusetts as the monster storm gained strength and threatened millions of people along the coast. New York City and Long Island are in the danger zone as a violent tidal surge is expected. 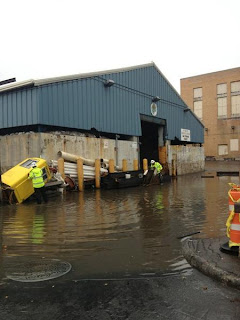 Department of Sanitation Teamsters battened down New York City before the storm hit, driving convoys of trucks to staging areas around the city and emptying and turning over garbage bins. They continued to collect trash and recycling during the storm today, and they'll be on 12-hour shifts tomorrow to clean up debris.

To the left is one mess they're already cleaning up. The Department of Sanitation salt storage building near the Hudson River is flooded.


Local 202 Hunts Point Market workers are out in these unsafe conditions as well. It is sad.

Tony Chipelo from Local 210 in New York says he's off today and possibly tomorrow. He posts:


Company I work for is pro safety:)


Yonkers DPW is working and local 456 oil men are out in this.‬

Amtrak service is cancelled along the Northeast Corridor and so are thousands of commercial flights. We hope none of our brothers and sisters in the Airline Division or the Rail Conference got stranded (though we think some probably they were).

Andrew O'Derry from Local 929 tells us he's "Hunkered down in South Philly."

Michael Trudeau, a member of Local 251 in East Providence, R.I., is a Budweiser driver. He tells us he had no work today but he got the call for 8 a.m. tomorrow.


USFoods in NJ sent out their drivers today locals 107/628 to make deliveries claiming us as essential personnel. God forbid a bar doesn't get their chicken tenders and onion rings. Corporate profits over people. Please be safe out there everyone!

Some UPS Teamsters worked through the hurricane:


Craig Posner Local 804 is working. People need their amazon and VS underwear. What happened to safety is top priority? Ridiculous!!!! 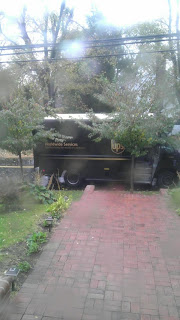 But UPS customers appreciated their deliveries. @700MHz took the photo of the brown truck (right) that delivered to his door and tweeted:


Wow this is what I call service and commitment

Other UPS Teamsters got to stay home with their families:

CabbaGe Dbmc Local 355. UPS made a good call and let us park our brown trucks and be with our family's today

We'll keep you posted. And we'll leave you with this reminder from our good friend, Teamster retiree George Corneliusson:


The best recovery work will be done by union workers including Teamsters!