Calif. Teamsters could win this battle in the War on Workers

Two years ago, the citizens of Concord voted to raise city revenue to maintain and protect their municipal services. But the city is ignoring the voters’ referendum. It is shutting down services. Our sisters and brothers from Local 856 who work for the city are forced to take furloughs.

Here's the good news: The state is meeting with Teamsters officials next week to discuss the charges against the city for the illegal furloughs.

Earlier this week, Local 856 members spent their second unlawful furlough day conducting community outreach. Dozens of members came out to speak with businesses and citizens about the service cuts. People were urged to contact city officials to restore the services.

Here's the message from Local 856 to its Concord members:


Way to go!  Our union is stronger today because of your participation.   Dozens of members showed up at Todos Santos Square this morning.  Community outreach coordinator Ryan Camp was on hand to brief us and within an hour we had distributed nearly 400 fliers.

Mayor Lione, Councilman Helix turned out in support and City Council Candidate Tim McGallian accompanied members on the walk.  Business owners and citizens told us they were concerned about continued cuts to public services.  They also showed support and even posted our flyers in their places of business. 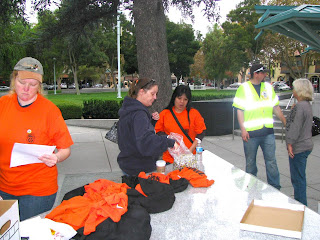 Our activism is building and it couldn't come at a more crucial time.  We received word this morning that the state has scheduled a meeting next week regarding the charges filed against the City for imposing the furloughs in violation of law.  This meeting will take place Thursday at PERB (Public Employee Relations Board) headquarters in Sacramento.  The very next day we reconvene for the fifth and potentially final day of fact finding.

Wear your union button on Thursday and Friday next week to show unity as we continue to fight for a fair contract.

A special thanks to everyone who took time to get involved.  If you couldn't make it today you can still participate!  Sign up to be an activist in your workplace.  You can sponsor you workgroup or shift and help communicate updates, provide feedback and recruit members for our next action.

That's the way to fight the War on Workers!
Posted by Teamster Power at 12:13 PM