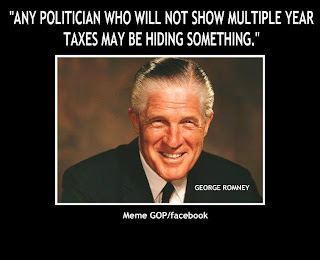 It's taking us more than a week to share Rolling Stone's report all the ways Mitt Romney avoided paying taxes on the fortune he made harvesting companies at Bain Capital. This one's a little complicated. But note the practices described in Part VII were investigated by New York's attorney general.

Not content with the carried-interest boondoggle, Bain also uses a scheme known as fee conversion to transform smaller management fees – which are supposed to be taxed as regular earnings – into investment income taxed at only 15 percent. A Bain manager simply "waives" his right to his fee and is instead staked an investment of equal value in the private equity fund. Because the manager can then cherry-pick from the fund's investments, he is virtually guaranteed a rich return – flouting the spirit of the lower tax rate on capital gains, which is designed to reward investors who take risks with their money. "Because they didn't receive the cash, they claim that it's not a taxable event," says Fleischer. "It's not legal." New York's attorney general has launched a criminal investigation into the practice.

Romney denies he took part in such waivers, which may have robbed the Treasury of up to $220 million. But according to Fleischer, Romney's financial records suggest he "benefited personally from fee conversion." He also served as the sole shareholder in the firm that set up the deals, making him legally responsible for determining how Bain structured them.