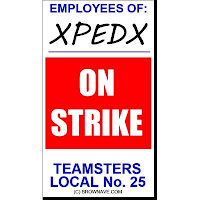 Boston Teamsters are standing strong after walking off the job Oct. 1 at Xpedx in Wilmington, Mass. The company is spending tens of thousands of dollars on out-of-state scabs rather than funding the contract.

There have been tense confrontations on the strike line. Scabs rolled in with a police escort on Day 5. One man was arrested for driving through the picket line. And a local business across the street kicked the Teamsters off his lot.


The Wilmington Patch reported on Oct. 5,


Wilmington Deputy Police Chief Bob Richter said that at about 9 a.m., an independent truck driver pulled into the entrance of xpedx at 613 Main Street where workers were picketing.

When police stopped the man at the picket line, he sped up and drove forward, forcing one of the officers to hang on to the side of the truck to avoid falling.

The 79-year-old man was arrested and charged with assault with a dangerous weapon and various motor vehicle charges. He was arraigned in Woburn District Court on Thursday afternoon. 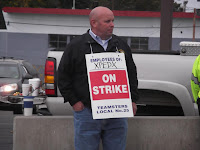 As the saying goes, these Teamsters strike when provoked. They've given the scabs one can of verbal  whoop-ass after another. You can read all about it on their Facebook page (Note: It isn't rated PG-13). And the business owner who wouldn't let them stand in his lot -- well, here's what they posted:


Shame on Charlie's Auto body owner for throwing the XPEDX striking workers off his property. Good time Charlie has a vacant building and parking lot that the workers could use to park and to set-up the picket line operation. Call Charlie's Auto Body and let him know how you feel about this decision!

The strike also had some lighter moments. Watch this video of two scabs trying to do one Teamster's job -- with entertaining commentary.

One reason for the strike is crappy equipment. Watch a video here of an Xpedx tractor being towed, to the taunts and jeers of the strikers. Sister Lynda Beaulieu-Fresolo said:


We've been reporting some of these defects for months, even a year! 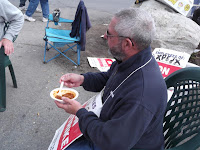 Local 25 members have joined the line on 613 Main St. in Wilmington. Last weekend, friends and family came by to make sure the troops were well fed.