Rock on to the Drive-By Truckers

The New York Times reports that several start-up companies in the U.S. are developing turbines that make electricity from tidal currents.

Click here for a very cool graphic of how it works:
Posted by Teamster Power at 12:26 PM

Where are the prosecutions?

"I think it’s fair to say that so far, what we’re looking at here is a failure of the rule of law."

"...the crucial act of denial in the banking sector, in my view, is that it has not come to grips with the extent of fraud, abuse, and failures of documentation that underlay the crisis in the first place. We know from the evidence that we’ve seenso far that there were massively fraudulent practices in mortgage origination—that these practices were abetted by the underwriters and by the ratings agencies, which declined and even refused to look at the underlying loan documentation. And I think the failure to confront that problem—which was covered over by the “stress tests” and the revision of market-to-market accounting rules—remains an unresolved issue."

Read the whole thing here. Long, but worth it.
Posted by Teamster Power at 12:23 PM

Some good green news for a change 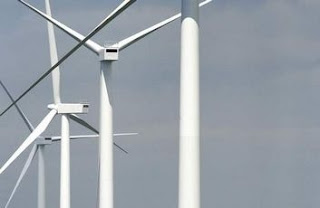 Last week, developers got federal approval for a wind farm off the coast of Cape Cod. They’ll build 130 wind turbines in Nantucket Sound. A German-based company – Siemens – is supplying the wind turbines. But here’s the good news. Siemens opened a plant in Iowa that will supply the turbines for the Cape Cod project. President Obama paid a visit last week….
Posted by Teamster Power at 3:33 PM


AP’s Paul Elias has the story:


Her dual roles have turned her into a civil rights crusader for the
company's many critics, who have dubbed the legal battle "Betty v. Goliath." It
is a far cry from where Dukes expected to be when she enthusiastically accepted
an offer in 1994 to work the cash registers part-time for $5 an hour. She
dreamed of turning around a hard life by advancing, through work and
determination, into Wal-Mart corporate management. Read the whole thing here.

Posted by Teamster Power at 3:28 PM