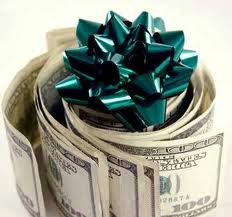 Here is what we thought would be the last installment of an eight-part series about Mitt Romney's tax dodges, compliments of Rolling Stone. But today we got a surprise from a different publication about another Romney tax dodge. So we bring you the penultimate installment in a nine-part series showing how Mitt Romney fails to pay his fair share of taxes.

Today it's the Tax-Free Trust.

Romney has shifted enormous wealth – as much as $100 million – into a family trust, a fortune he doesn't include in the $250 million estimate of his net worth. His campaign admits he paid no gift taxes in transferring assets to the trust, even though individual gifts above $13,000 are subject to taxation. A direct gift of $100 million would have incurred a tax hit of at least $29 million, according to Michael Graetz, a former Treasury official under George H.W. Bush.

How did Romney skirt the limits on gifts? Tax experts believe that he made his contributions to the trust in the form of the carried interest he received from his Bain funds. For income-tax purposes, the assets were technically valued at zero, because the gains would not be taxed until the fund's investments were cashed out years later. In reality, though, Romney could have sold his carried interest to a third party for millions – making it absurd for him to pretend that his gift had no market value. Yet even if the move was illegal, Romney has nothing to fear: Tax returns on gifts are almost never audited, and they can't be challenged at all after three years.

Romney also used a scheme called an "intentionally defective grantor trust" to dodge the gift tax. Instead of having the trust pay taxes on its profits, Romney pays the tax bill himself. That keeps more money in the trust – amounting to another massive transfer of wealth that evades the gift tax. Even worse, the trust is exempt from the estate tax – meaning Romney's heirs will eventually pocket some $31 million they would have owed in taxes had he not siphoned off his fortune into the trust, tax-free.

Read the whole thing here.
Posted by Teamster Power at 9:58 AM