Another Wal-Mart strike in Okla. 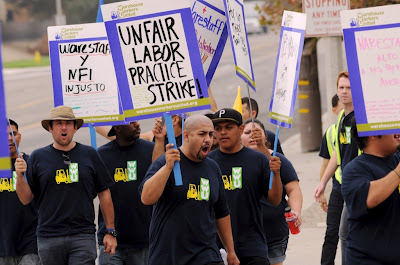 Since you can't depend on the mainstream media to do much else than regurgitate gaffes and poll numbers, it can take a while to find out what's going on in the world. We just learned that Wal-Mart workers in Oklahoma walked off the job on Sunday.


On Sunday evening, a band of renegade Walmart employees in Sapulpa, Okla., left work to protest without the aid of national labor groups. Stirred by what they saw on the news, Jeffrey Landry, David Gibbs and Nathan Beck stood outside in the vast parking lot of their Supercenter with homemade signs, beckoning cars to honk.

Unlike last week's strikers, who were nearly all members of the union-backed worker organization OUR Walmart, the Oklahomans had no outside assistance putting together their action.

"I saw what was happening at stores in Dallas and around the country, and I did my research," said Landry, 34, whose homemade sign protested workers' hours being cut. Landry said Walmart slashed his hours a month ago after he involved a regional HR manager in a workplace dispute over department placement.

"They're trying to prove they're in charge by silencing me," said Landry, a father of three who earns $8.65 an hour and has worked at Walmart for two and a half years.

The tiny group of protesters, who also made an appearance outside the store on Monday, originally planned to include 10 employees in their action. At the last minute, seven of the potential protesters backed out, Landry said. "A lot of workers came to the door and watched us, shaking their heads and saying, 'I don't want to lose my job,'" he said.

Check out this video of the protesting workers describing conditions at Wal-Mart.

Since Wal-Mart has such control over the U.S. economy, it could be a victory for all workers. Wal-Mart
warehouse workers (employed by Wal-Mart contractors) walked out with the help of Warehouse Workers for Justice, which is affiliated with the United Electrical Workers and Warehouse Workers United, which is backed by the Teamsters' Change to Win Federation. OUR Wal-Mart and UFCW lawyers are supporting the retail strikers.


...for every company employee fearless enough to participate in one of the sidewalk rallies, there were dozens who kept their heads down, stayed on the job but who silently endorsed the protest. That is the way it has always been when social movements get their start.

But this is what has to happen, he says:


OUR Walmart organizers and UFCW lawyers must therefore defend and protect those brave workers who stuck their necks out in order to construct a new sense of solidarity, one that has the potential to subvert the corporation’s faux communitarianism. If they can prevent such retaliation and make it safe for workers to remain members of OUR Walmart, talk among themselves, and participate in even the most minimal degree of “concerted activity,” then a huge victory indeed will have been won.

Follow what's going  on at OUR Wal-Mart here and at Warehouse Workers United here.
Posted by Teamster Power at 9:43 AM