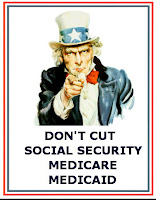 Congress may try to cut Social Security, Medicare and Medicaid sometime after the election and before the new members are sworn in. At least that's what former U.S. Sen. Russ Feingold thinks. A lot of other people do, too.

Feingold explained in a letter:


After the election, there will be a movement in Congress to eviscerate Medicare, Medicaid, and Social Security benefits before the inauguration.

This so-called “lame-duck session” is when politicians feel the least accountable to voters — and when they are the most likely to push through massively unpopular legislation like this that does huge damage to average working families.

Billionaires and CEOs are right now goading members of Congress to cut the health and retirement benefits earned by Americans. They either don't know or don't care that similar cuts in Europe -- aka austerity -- are destroying the economies of Greece, Spain, Ireland, Portugal and Italy.

Here's what you can do: Sign a petition to Congress and President Obama that says, in part,


There are fair and sensible ways to reduce deficits, but having the rich and the powerful beat up on working families and the elderly is not one of them.

We ask that you join us in opposing any benefit cuts to Social Security, Medicare, or Medicaid.

Posted by Teamster Power at 1:26 PM