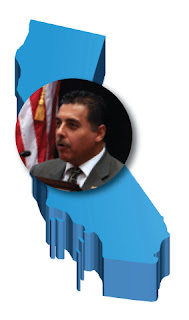 We're paying close attention to 19 political candidates who are Teamsters, used to be Teamsters or are close Teamster friends. Between now and Nov. 6, we'll be presenting one candidate a day to you, courtesy of Teamster Magazine. Read about other Teamster candidates here, here and here.

When Jose Hernandez was a kid, he worked in the fields of San Joaquin Valley, Calif., picking cucumbers with his family and dreaming about missions into space. Today, after serving as a NASA astronaut and spending 14 days orbiting Earth in 2009, Hernandez is running for Congress.

Hernandez credits his Teamster job at a cannery for helping him pay for college and setting him on the path to reach his dream.

“I went from a job that paid minimum wage to $12 an hour plus benefits,” he said. “That was big money in those days and it helped pay my tuition and keep me in school. It wouldn’t have been possible without the Teamsters Union.”

A former member of Local 601, Hernandez’s impressive journey from migrant farmer to Teamster to astronaut has led to his current campaign to represent the people of California’s 10th District.

Hernandez believes too many members of Congress are more concerned with scoring political points while working families struggle to make ends meet. That’s why his campaign is about getting back to the basics. Keeping jobs in America and building the foundation for tomorrow’s jobs through education are central to his mission in Congress.

As a boy, Hernandez remembers watching the launch of Apollo 17 and deciding at that moment that he wanted to be an astronaut. But his accomplishments were not limited to the stars. On the long road to becoming an astronaut, Hernandez was recognized for his engineering work using Cold War technology to develop lifesaving mammograms. He also worked with the U.S Department of Energy on Russian nuclear nonproliferation issues.

Hernandez’s life is a tribute to determination. He applied 12 times to become a NASA astronaut before he was finally accepted. During that time, he earned his pilot’s license, became a master scuba diver and learned to speak Russian.

For Hernandez, his campaign is about creating jobs and making sure that the opportunities that he had as a child are available for all children in America.

“When I worked at the cannery, they told me I wasn’t guaranteed a job the next summer after my first year of college,” Hernandez recalled. “I talked to my shop steward and Local 601 fought for me so I was able to continue working and pay for school. That’s the kind of advocacy we need in Washington—representatives fighting for working people.”
Posted by Teamster Power at 11:30 AM