Teamsters rock the vote all over the USA

Teamster boots are walking all over the country for pro-worker candidates. It's never been more important to elect people who will make sure that the benefits of our economy go to working and middle-income families.


President Barack Obama asked huddling supporters in a chilly City Park on Wednesday to stick with him for another four years, calling his GOP opponent out of touch on America's problems and arguing that the presidential election is about trust. 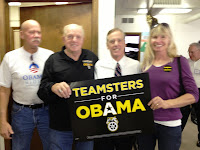 Obama stood with sleeves rolled up beneath overcast skies and boasted about his frenetic schedule with nine swing state stops in a no-sleep 38-hour stretch, 13 days before the election.

Polls say Romney and Obama are in a statistical tie in Colorado.

Teamsters from Local 30 in Pennsylvania were phone banking for President Obama in Greensburg -- with none other than former Vermont Gov. Howard Dean. In the photo above are Roger Foley, Carl "Hands" Paullet from Teamsters Joint Council 40, Gov. Dean and Jan Foley. 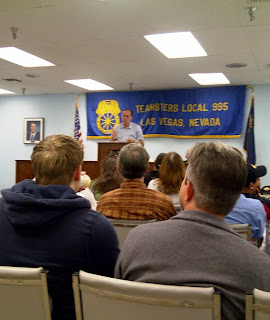 To the left is a picture of Local 993 President Mike Magnani speaking with his members at the general membership meeting on Wednesday. Mike asked his members to vote for President Obama to protect their jobs. He reminded his members that they have until Nov 2 to vote early.

Nevada is the home of billionaire Sheldon Adelson, who is trying to buy the election for Mitt Romney. Adelson, who owns casinos overseas, wants to break the unions responsible for Las Vegas' middle class and reduce gaming and hotel wages so they match those in India and Macao. He told the Times of India,

Our brothers and sisters in Ohio are working hard for President Obama and Sen. Sherrod Brown, one of the staunches opponents of job-killing trade deals you'll meet. Below is a photo of Sen. Brown  talking at Teamsters Local 413 and 284 in Columbus earlier this week. 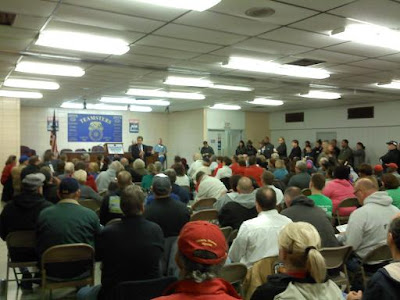 And finally, we bring you this photo of Carl A. "Hands" Paulette, retiree; Jim McClalland and Mark Hilderbrand from Local 249. They's standing in front of the Teamster Temple in the Lawrenceville section of Pittsburgh. We love to see that Teamster power! 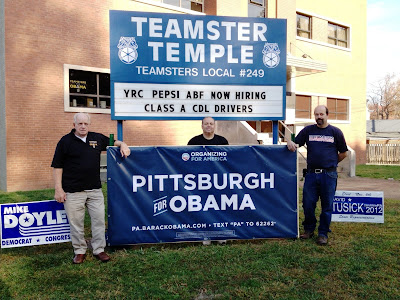