So says the Naked Capitalist. She's explaining why 80 CEOs signed on to a lobbying campaign to cut Social Security, Medicare and Medicaid. Reports The Hill,


The group, which now includes the heads of major companies like General Electric, Microsoft, Dow Chemical and Goldman Sachs, plans to embark on a multi-million advertising campaign to press its case.

It is nothing new for big business to air its opinion on Washington policymaking. Countless letters from dozens of industry groups typically flood Capitol Hill inboxes.

But this new effort marks an increased push that is driven in part by dissipated trust in Washington after last summer’s debt limit standoff.

The group said Thursday it had raised over $35 million in six weeks from private donations, and was eyeing potential ad buys as well as setting up local chapters to push the cause.

And here's a reason to be very alarmed:


The CEOs also said they planned to make their case to their employees — six million in all — hoping in turn they would carry the message back to their lawmakers.

The Wall Street Journal's Felix Salmon ridicules their argument that cuts are needed to shrink the deficit. 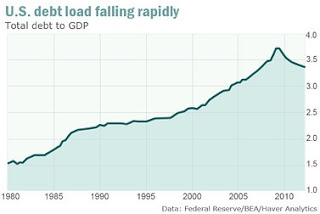 There are lots of serious threats out there to the economic well-being and security of the United States, and the national debt is simply not one of them. Nor is it growing. The chart on the right, from Rex Nutting, shows what’s actually going on: total US debt to GDP was rising alarmingly until the crisis, but it has been falling impressively since then. In fact, this is the first time in over half a century that US debt to GDP has been going down rather than up.

Salmon accuses the CEOs of being the real threat to the well-being and security of the United States:


Money is cheaper now than it has been in living memory: the markets are telling corporate America that they are more than willing to fund investments at unbelievably low rates. And yet the CEOs are saying no. That’s a serious threat to the economic well-being of the United States: it’s companies are refusing to invest for the future, even when the markets are begging them to.

Brace yourself for the lame-duck session.
Posted by Teamster Power at 12:40 PM