Did ALEC buy your state representatives? Now you can find out. 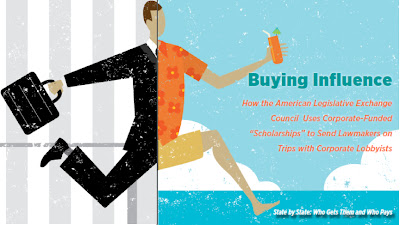 Now you can find out for sure. ALEC, the American Legislative Exchange Council, is notorious for bribing paying for state lawmakers and their families to take lavish vacations. At posh resorts like Hilton Head, ALEC makes sure state representatives get babysitting services, fine dining and face time with deep-pocketed corporate contributors.

Now, our friends at the Center for Media and Democracy issued a new report listing all the corporations that gave money to fund the trips and all the lawmakers who received them, by state.

You can peruse the report here.

We took a quick look. In a matter of minutes we found these interesting items:
There's more ALEC news: A former IRS official accuses ALEC of lying about its assets. Roll Call reported yesterday,


The former head of the IRS’ Exempt Organizations division accused the conservative nonprofit American Legislative Exchange Council of lying about its assets in its federal tax filings in a letter sent to the agency Wednesday.

Marcus Owens, a lawyer at Caplin & Drysdale who for a decade directed the IRS division responsible for approving organizations’ charity statuses, said ALEC made conflicting statements to federal and state regulators in an attempt to maintain its status as a tax-exempt charitable nonprofit. A copy of the letter was obtained by Roll Call.

It’s the second complaint against ALEC that Owens has filed with the IRS this year on behalf of Clergy Voice, a coalition of Christian progressive ministers in the battleground state of Ohio. The clergy group is concerned that ALEC is violating its tax status and that the strict voter identification laws it promotes ultimately disenfranchise voters.

Sounds like trouble in ALEC Land. Heh-heh.
Posted by Teamster Power at 4:43 PM