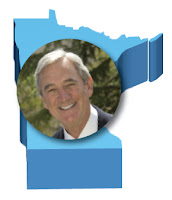 Former congressman Rick Nolan retired from Congress in 1981, but he never stopped paying attention to what was going on in Washington, D.C.—or with his fellow Teamsters. That’s why he’s again running for the U.S. House Seat in Minnesota’s 8th District.

“Unions are the backbone of the middle class in America,” Nolan said. “Let’s not forget that the union movement raised the working class out of poverty less than a century ago and provided a powerful voice for the average working man and woman. That voice is being challenged every day. Working families need more allies, and unions continue to fight for all of us.”

“I worked my way through college as a Teamster at UPS. This is my union,” Nolan said. He is committed to fight for the Employee Free Choice Act, pension protection and against right to work.

Nolan’s background has not only shown him the importance of unions but of small businesses. He has been a successful local business owner who has created jobs throughout Minnesota through his sawmill and wood pallet factory, which is family run.

Nolan is a former three-term Minnesota congressman recognized nationwide for his battles on behalf of working families, farmers, small businesses and rural communities.
Posted by Teamster Power at 5:00 AM