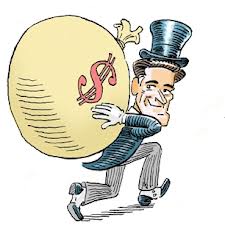 The nice thing about being superrich is that you don't have to play by the same rules that everybody else does. Mitt Romney pays taxes at a lower rate on his fortune than nurses or law enforcement officers pay on their middling incomes.

Here we bring you an explanation of how Romney gets away with it, thanks to Rolling Stone.

For political purposes, Romney claims his investments are held in a blind trust that he doesn't actively manage. (In fact, the trust sees just fine: It's managed by a close friend and is invested heavily in his son Tagg's hedge fund.) But if Romney told the IRS he were merely a passive investor, he wouldn't qualify for his most notorious tax break: the loophole for carried interest.

Here's how it works: Bain partners earn a cut of the profits from the investments they manage – usually 30 percent. This "carried-interest" is not a return on any personal investment they made – it's just another form of compensation, like an ordinary paycheck. Yet under the carried-interest loophole, the earnings are taxed at the capital gains rate of 15 percent, rather than the income-tax rate of 35 percent. (They're also completely exempt from payroll taxes, which support Social Security and Medicare.) "When Romney says, 'I have a low tax rate because most of my income comes from investments,' that's not really true," says Fleischer. "He's receiving carried interest in exchange for past services."

Indeed, more than a decade after he left Bain, Romney is still booking carried interest as though he were actively leading the firm. Ann Romney's blind trust also claims carried interest, for allegedly "performing services" for a Bain fund in the Caymans. In the past two years alone, the loophole has allowed the Romneys to dodge $2.6 million in taxes.

Posted by Teamster Power at 5:18 AM