Our brothers and sisters in the Teamsters Rail Conference rallied Thursday in Tucson for U.S. Rep. Ron Barber. He's running for re-election to an open seat (because of redistricting) in Arizona.

During his 6 months in Congress, Ron Barber voted with the Teamsters 100 percent of the time. He voted to end the Bush tax cuts and for middle-class tax relief.


Barber won a special election for his seat in Congress after Gabrielle Giffords resigned. She had been shot in a parking lot. Barber, her former aide, was also injured in the attack.


We had around 80 members and spouses show up, and most of them were wearing our Proud to Be American, Proud to be Union tee shirts.  One of the pics has all of them turning around to show the logo with a fist pump.  Congressman Ron Barber, the Democrat currently in Gabby Giffords' old seat is up for election and he joined our meeting as well.

The shirts, by the way, can be purchased for $10 from the BLET online store. Here's what they look like up close: 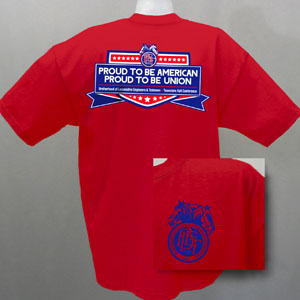