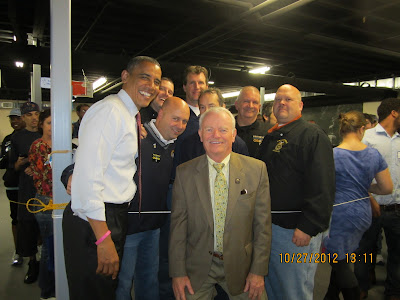 
We had a 15 minute notice that President Obama was coming to visit Teamsters Local 633 TODAY!!!!

The president was on his way to Nashua. When he arrived, he said,  "I saw a bunch of signs, said Teamsters for Obama, I thought I'd stop by."

You can see from the photo he was at the Manchester hall shortly after lunch. 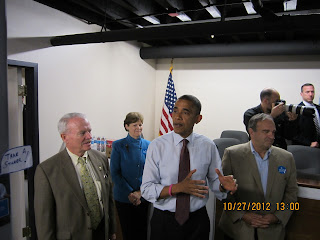 A group of about 60 members greeted the president with loud cheers and chants of “fired up, ready to go!” Obama addressed the group briefly, telling them the state will be “very important” on Election Day on Nov. 6.

“We don’t know how this thing is going to play out,” Obama said. “These four electoral votes right here could make the difference.”

Before leaving the Teamsters office, the president listed his accomplishments, including protecting equal pay for women, and he added: “I’m going to need you guys over the next 11 days to work as hard as you can. Do it not for me, do it for your kids.”

Our New Hampshire brothers and sisters cleaned up real nice, don't you think?
Posted by Teamster Power at 3:10 PM