Boston Teamsters go all out for Elizabeth Warren

Our brothers and sisters in Massachusetts have some excellent reasons to send Elizabeth Warren to the U.S. Senate.

One is the Consumer Financial Protection Bureau (CFPB). It was Warren't idea and she set it up.

During its 15-month existence, the CFPB recovered hundreds of millions of dollars from credit card companies that cheated consumers. Yesterday the bureau announced it will supervise large debt collection agencies.

(If you don't think collection agencies need supervision, consider the debt collector who berated a disabled Army veteran who defaulted on a student loan, saying, “If you would have served our country better you would not be a disabled veteran living off Social Security while the rest of us honest Americans work our asses off. Too bad, you should have died." True story.)

The CFPB is why the financial industry pretty much hates Warren. And it's why her opponent, Sen. Scott Brown, rakes in corporate cash from financial, pharmaceutical and other corporate interests. 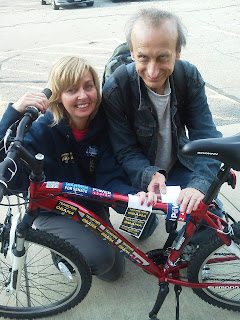 Local 25 Teamsters have been working tirelessly for Warren -- and for President Obama -- over the past few months. Brother John Juszkiewicz, a 20-year Teamster, sends us photos of members registering voters and getting out the vote. He's a 20-year Teamster working on the campaign, which involves a lot of member-to-member communication.

We also have the great photo (below) of Warren inside Local 25's tractor-trailer cab after speaking to the stewards seminar in Stoneham last summer. "Show Scott Brown what a real truck looks like," the members said.

Polls are showing Warren with a 5-point lead over Brown, who was elected in a special election to fill the late Sen. Edward M. Kennedy's seat. We like to think it's the Teamsters' hard work that's getting it done for her. 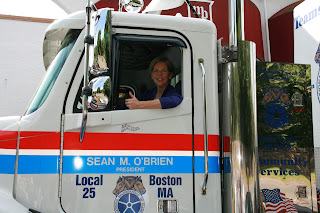 
Brown determined to run as a not-particularly-bright evening drive-time AM radio host. He latched onto the nothingburger of Warren's Indian ancestry and went into it all the way back to his molars. He wouldn't shut up about it. Alternately, he tried to make an issue out of the fact that Warren had worked for companies going through bankruptcy, including Travelers Insurance, which was dealing with the whopping awards granted to the people whom the asbestos industry had poisoned and killed. This might have worked — to understand what Warren did required a knowledge of bankruptcy law beyond most people who are not Elizabeth Warren — except that Warren marshalled the lawyers for the plaintiffs in those suits, and the surviving members of the victims' families, and they all went very public about how much Warren's work had helped them and their families. Some of them appeared in a very powerful television commercial called "Ashamed," in which they criticized Brown for politicizing their private tragedies in such a reckless way.

Stay tuned. And keep up the good work, Teamsters!
Posted by Teamster Power at 9:58 AM