The monster storm crippled the city, flooding the subways and the Wall Street District and downing power lines. Hundreds of thousands of people have no power. Some New York hospitals were evacuated, and Sandy killed at least 10 people.

We learn that Local 831 is on the job from Adam Rodriguez on Facebook. Paul Monico agrees: "New Yorks Strongest! We're on it! Local 831!!"

John Conrad doesn't expect recognition but doesn't care. His Facebook post: "831 for life! No headlines No medals No problem we love our city!"

His wife Trish Conrad appreciates all he does:


Stay safe...and thank you to my husband John Conrad, as well as Michael McCormack Sr., Hector Colon, Tommy Figs, Mike Lennon and all the other men and ladies in green for all you.do for our city! As much as I would love my husband to be home with us during this devastating time, he is doing what needs to be done for all the residents of NYC and I could not be more proud of him!

There were more expressions of thanks, pride and gratitude on our Facebook page:


TJ Tompkins It's amazing that these useless "thugs" will risk life and limb, leaving family at home just to repair stuff, overtime must be AWESOME! No wonder they're so rich and powerful!!

Nicki Wohlers Stay safe my brothers and sisters, fellow Teamsters......you are my heros!

Maureen Keen God bless all the people who are working to make our lives better after such a horrible storm.

And check this out from Brian Bowles' Facebook page. He wrote, "It grew for decades and decades. #Sandy blew in and took in down in minutes. It only took NYC Sanitation seconds to clean it up and get the road open again. Thanks guys!" 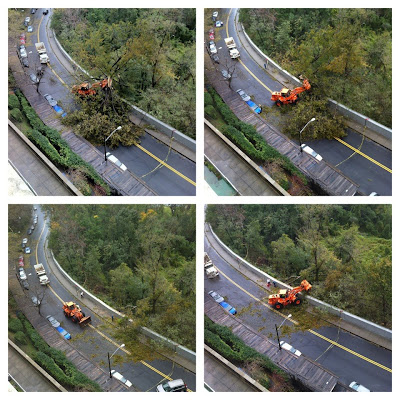 Posted by Teamster Power at 2:09 PM