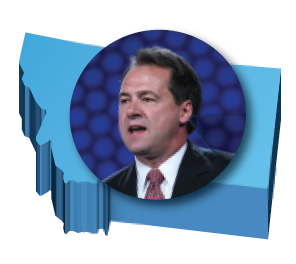 The presidential election isn't the only one that matters on Nov. 6 -- not by a long shot. The outcome of races at the state level will have an enormous impact on working families.

That's why we're paying close attention to 19 candidates who are Teamsters, used to be Teamsters or are close Teamster friends. Between now and Nov. 6, we'll be presenting one candidate a day to you, courtesy of Teamster Magazine.


Montana Attorney General Steve Bullock knows a raw deal when he sees one.

The former labor attorney for Local 190 and current candidate for governor of the Big Sky State led a bi-partisan national group of state attorneys general in cracking down on FedEx Ground’s illegal misclassification of 13,000 drivers across the country. Largely due to Bullock’s efforts, the company has been forced to change its business model to more fairly protect workers’ rights.

“They may have the money, but we have two things they don’t; we’re right and we’ll work harder than them,” Bullock told the Teamsters Convention in 2011. “It will be labor leading the resistance to the war on workers.”

As governor, Bullock is committed to rebuilding Montana’s manufacturing base and creating good, middle class jobs. A longtime worker advocate, he understands that Montana needs jobs that families can live on—with good health care and a secure retirement.