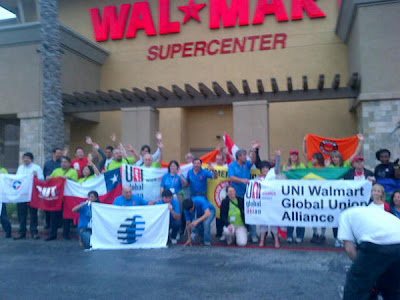 Wal-Mart's tremendous power to direct the U.S. economy downward is being challenged by a brave handful of workers.

They may well succeed. Matt Stoller at the Naked Capitalist reveals that Wal-Mart buckled to less intense union pressure in 2006. That's when Wal-Mart Watch began attacking the retailer for paying poverty wages.

Stoller reported that Wal-Mart intended to increase its part-time workers to 40 percent from 20 percent of the workforce in 2006. But Wal-Mart Watch raised enough of a stink that the company reversed itself two months later. Wal-Mart raised starting wages for workers at 700 stores.

And here's something interesting (and frightening):  Stoller knows that because Wal-Mart wields so much power that the Federal Reserve sets economic policy according to what Wal-Mart tells it. The Federal Open Markets Committee (the Federal Reserve's chief economic policymaking body) keeps minutes and makes them public after five years. That's how Stoller found out about the 2006 wage hikes.


Walmart data was used by the Federal Reserve’s FOMC to understand labor markets, inequality, health care costs, supply chains, and inflation.  As the global recession began to come into view, one FOMC member noted, ”It’s certainly disconcerting to hear that one of the largest private institutions in the world – Wal-Mart – is missing its growth targets fairly significantly.”

The Fed listens to Wal-Mart because the company influences wages throughout the country and organizes the U.S. economy to its own ends:


Walmart walks into your company and dictates how you are to manufacture, price, and package your product.

Scholar Barry Lynn, in End of the Line, explains how:


The more Wal-Mart learned about the operations of its suppliers, the more it was able to compare one supplier to another, to spot inefficiencies and demand fixes, to zero in on profit centers inside its suppliers. As time went on, Wal-Mart was able to dictate not only how its suppliers packaged and distributed their products, but what they manufactured, how they manufactured, how much money they made on their businesses, and indeed whether they would remain in business at all. Wal-Mart became not merely the market leader; in many senses, it became the market itself.


The logistics revolution that has ripped through the American economy, de-industrializing the country and deflating wages, came through Walmart.

Let's hope Wal-Mart workers can turn that around.
Posted by Teamster Power at 2:06 PM