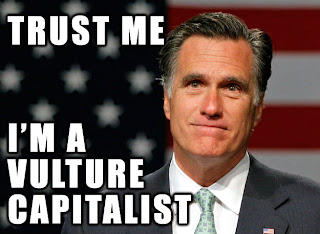 Mitt Romney made $15 million from a hedge fund investment that sent most of Delphi's job overseas. The hedge fund principals blackmailed the government into an enormous payout.

It all starts with Delphi Automotive, a former General Motors subsidiary whose auto parts remain essential to GM’s production lines. No bailout of GM—or Chrysler, for that matter—could have been successful without saving Delphi. So, in addition to making massive loans to automakers in 2009, the federal government sent, directly or indirectly, more than $12.9 billion to Delphi—and to the hedge funds that had gained control over it.

One of the hedge funds that invested in Delphi was Elliott Management. Romney invested $1 million in the fund through his wife's blind trust.

Romney never would have profited had it not been for the U.S. taxpayer. Writes Palast:


...without taking billions in taxpayer bailout funds—and slashing worker pensions—the hedge funds’ investment in Delphi would not have been worth a single dollar, according to calculations by GM and the US Treasury.

Altogether, in direct and indirect payouts, the government padded these investors’ profits handsomely. The Treasury allowed GM to give Delphi at least $2.8 billion of funds from the Troubled Asset Relief Program (TARP) to keep Delphi in business. GM also forgave $2.5 billion in debt owed to it by Delphi, and $2 billion due from (Elliott Management's director Paul) Singer and company upon Delphi’s exit from Chapter 11 bankruptcy. The money GM forgave was effectively owed to the Treasury, which had by then become the majority owner of GM as a result of the bailout. Then there was the big one: the government’s Pension Benefit Guaranty Corporation took over paying all of Delphi’s retiree pensions. The cost to the taxpayer: $5.6 billion. The bottom line: the hedge funds’ paydays were made possible by a generous donation of $12.9 billion from US taxpayers.

Then the hedge funds sent the company to China. Palast:

Of the twenty-nine Delphi plants operating in the United States when the hedge funders began buying up control, only four remain, with not a single union production worker. Romney’s “job creators” did create jobs—in China, where Delphi now produces the parts used by GM and other major automakers here and abroad. Delphi is now incorporated overseas, leaving the company with 5,000 employees in the United States (versus almost 100,000 abroad).

Now the United Auto Workers are suing Romney for breaking ethics laws by failing to disclose his investment in Delphi.