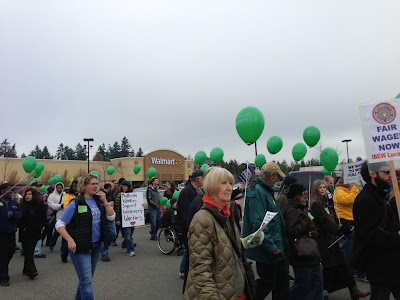 Details are sketchy, as there seems to be a mainstream media blackout of the growing labor discontent at Wal-Mart. But we're hearing from Twitter that Wal-Mart workers walked off the job in six Seattle stores today.

A press release from Making Change at Wal-Mart tells us:

This afternoon, Walmart workers from cities across the country announced that these strikes are the first of 1000 protests, including more strikes, rallies and online actions, at Walmart stores leading up to and on Black Friday. Workers announced upcoming strikes and protests in Chicago, Dallas, Los Angeles, Miami, Milwaukee, Washington DC, as well as workers walking off the job in Oklahoma, Mississippi, Louisiana and Minnesota. The group held off announcing the specific dates of the protest out of concern that Walmart would use it as an opportunity to try to silence the workers’ voices. 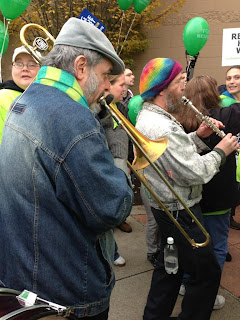 There's a livestream video of a noisy rally outside a store in Federal Way, Wash., here. We hear a band playing, "Get Up, Stand Up for Your Rights."

Josh Eidelson at The Nation noted on Tuesday that the Southern California strike,


...will be the latest in an unprecedented wave of work stoppages throughout the retail giant’s US supply chain. It follows strikes by seafood workers in June, by warehouse workers in September, and by 160 retail workers in twelve states last month. It comes a week before Black Friday, the post-Thanksgiving shopping extravaganza that workers have pledged—barring concessions from the company—will bring their biggest disruptions yet.

The strike in Mira Loma, Calif., that started yesterday has moved to the street today: 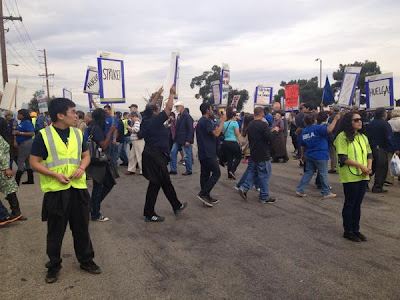 Warehouse Workers United tweets that supporters are risking arrest outside of the Wal-Mart-contracted warehouse.

One former Wal-Mart worker was handcuffed yesterday for talking to retail workers about the planned Black Friday strike. Again, Josh Eidelson has the story in The Nation:


A former Walmart employee was handcuffed Wednesday when he visited his old store to talk to workers about next week’s “Black Friday” strike. Alex Rivera, who was fired in September, told The Nation that Walmart management intentionally misled Orlando police, leading them to detain him for twenty minutes in the store. The incident was denounced by the union-backed workers’ group OUR Walmart, which alleges that Walmart has been breaking the law to keep its workers in line.

Teamsters are urged to support rallies outside of the Wal-Mart properties that are being struck. The best way to find a rally near you is to click here at the Corporate Action Network.