Here's something to be thankful for: Teamsters who delivered a truckload of fruits and vegetables for homeless and hungry victims of Superstorm Sandy.

Sandy inflicted enormous damage on the residents of that community, according to Reuters.


Belle Harbor sits on a narrow spit of land that thrusts into the Atlantic Ocean southwest of the John F. Kennedy International Airport. The area had been extensively flooded by Sandy's record storm surge, which marooned the beach community from firefighters who sped to the scene... 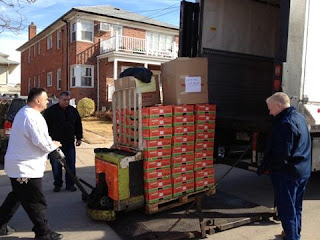 On Tuesday morning, the bridges to the Rockaways had been blocked off by the National Guard. Belle Harbor's downtown shopping district had also been ravaged by fire, and the boardwalk had been ripped from its pilings and strewn throughout the street. Many store fronts were crumpled and petroleum pooled in the gutters.

Cars and boats were smacked about the sidewalks like toys. The power was out, and predicted to stay out for days. There wasn't a bagel, cup of coffee or bathroom to be found.

The smell of smoke was still in the air.

Some residents have power back, but life is still a struggle. St. Francis de Sales is helping with basic needs. Reports WCBS,


Many stores are closed and people from Far Rockaway are walking 50 to 60 blocks to line up for food at St. Francis De Sales Parish in Belle Harbor.

They’re serving thousands of meals everyday in a large white tent where people can also get mental health counseling, legal aide, help from the utilities, and even a free massage....

They still need donations: food, cleaning supplies, warm blankets, and coats, though they are asking for no other clothing. 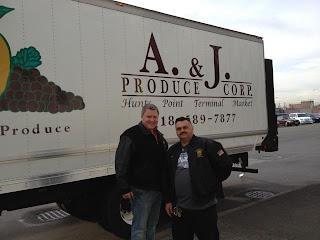 We're sure they're grateful for the fresh Teamster-delivered produce!

If you'd like to help victims of the Superstorm but can't be in the region, consider a donation to the Teamster Disaster Relief Fund. It's a good way to express your thanks for all you have.
Posted by Teamster Power at 5:54 PM