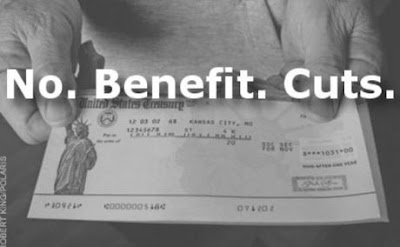 Corporate America just loves phony crises. They compel our elected representatives to do extremely unpopular things because they think the world might otherwise come to an end.

Teamsters General President Jim Hoffa, writing in The Detroit News, made exactly that point. He writes that the CEOs and billionaires who tried to buy the Nov. 6 election for their pal Mitt Romney were at it again the very next day:


On Nov. 7, they renewed their drive to seize every available penny from middle- and working-class Americans.

Their goal is to get rid of the retirement and health benefits that ordinary people work all their lives to earn.

They hide their intentions behind front groups with names like "Fix the Debt."

These groups, armed with dishonest lobbyists, work hard to create a phony crisis in Washington. After all, a crisis could convince politicians to do things that are extremely unpopular with the voters — like cutting Social Security benefits.

This phony crisis has a name: the "fiscal cliff."

The billionaires and CEOs would have you believe that terrible things will happen (we'll "go over the fiscal cliff") if Congress and the president don't reach some sort of budget agreement by Dec. 31. And it's true that jobs would be lost if the spending cuts agreed to last summer aren't modified.

Terrible things won't happen. Government spending will slow somewhat, and the tax withholding schedules will change. But it wouldn't be anywhere close to a government shutdown. And Social Security, Medicare and Medicaid would be untouched.

Hoffa calls the furor over the "fiscal cliff" what it is: economic blackmail. It's a way to force Congress and President Obama to go back and start to carve up Social Security, Medicare and Medicaid.

Let's not let them
Posted by Teamster Power at 12:52 PM