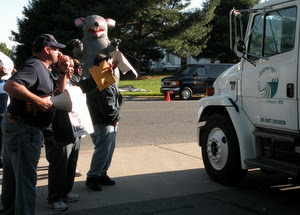 Great news! Local 639's long strike at Daycon is over and Teamsters will return to their jobs with back pay. They'll also go back to the bargaining table, where the company was ordered to bargain fairly.

We'll cross post the story by Adam Wright at the DC Labor Council. He and Chris Garlock took the photos.


It took two and a half years but the Teamsters 639 strike against Daycon is finally over. The Upper Marlboro, MD-based janitorial and maintenance supply company is calling the last remaining strikers back to work after a US Court of Appeals ruling Tuesday upheld NLRB rulings in the union’s favor.

“We won every ounce” said a jubilant Local 639 Business Agent Doug Webber. In addition to being ordered to bring all the union members back to work, Daycon owes strikers back pay and benefits “and must return to the table and bargain fairly” for a new contract, Webber told Union City last night.

Local 639 members at Daycon struck in 2010 when management illegally implemented their bargaining proposals and although the strikers subsequently offered to return to work, the company refused to re-hire them and engaged in what the NLRB determined were a series of unfair labor practices.

“We’re proud of our members, who hung in this fight for the long haul,” said Local 639 President Tommy Ratliff. “And we couldn’t have won this battle without the support of the Metro Washington Council, the Community Services Agency, and the entire local labor community, which came together to support this struggle.”

Said Metro Council President Jos Williams, “As if any more proof were needed after our wins at the ballot box on Tuesday, Local 639’s victory shows once more that solidarity, as always, works!”