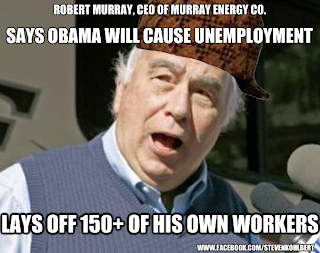 In case you missed it: One hundred fifty coal miners were laid off by the Ohio coal executive who made them miss a day's pay so they could be human props for a Mitt Romney campaign event.


...an Ohio coal mining executive and prominent Republican donor responded to the results of the presidential election by laying off more than 150 workers.

Robert Murray, chief executive of Murray Energy Co., the largest privately held coal company in America, blamed the layoffs on President Obama --  and, by extension, the voters who elected him -- in a memo to employees.

“The American people have made their choice,” Murray said in what he called a prayer that he delivered at a staff meeting at which he discussed the layoffs. The prayer was first made public by the Intelligencer/Wheeling News-Register. “We are a country in favor of redistribution, national weakness and reduced standard of living and lower and lower levels of personal freedom.... The takers outvoted the producers.”

This is of course nonsense. The real reason for the layoffs no doubt has to do with the slumping price of coal. And as Brother Dennis Pierce pointed out, coal prices fell because fracking allowed natural gas prices to fall. And fracking was unleashed by Republican President George W. Bush, who lifted hazardous waste regulations from the natural gas industry.

Um, can we stop playing with people's lives to make political points?
Posted by Teamster Power at 5:25 PM