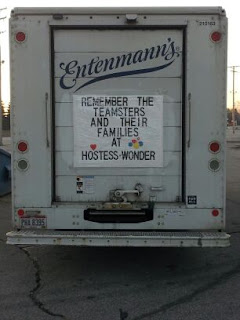 Billionaire Rupert Murdoch's Fox News predictably came out with a bunch of crap about the tragic Hostess liquidation.

Martha MacCallum, on "Today's Plutocrat Propaganda" "America's Newsroom," said Hostess is "blaming a worker's strike for crippling their ability to make and deliver their products."

Then Bill Hemmer blamed the job losses on "a labor dispute." He suggested the union put "18,000 jobs on the line." MacCallum said the employees were "paying dues to the union and then the union won't make a deal."

Read the whole thing here.
Posted by Teamster Power at 11:09 AM