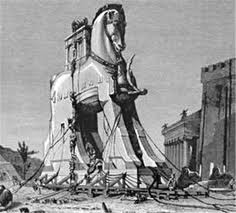 
...no one cares about the deficit. The people who claim to most care about it least. They have an agenda - giving more of your money to rich people - and the deficit is the excuse.

The Institute for Policy Studies explains exactly how the scam works. More than 80 looters and plunderers noble CEOs are proposing a compromise that they say would save the United States from financial ruin. They formed a group called "Fix the Debt" and came up with a "compromise." That compromise includes $134 billion in potential tax windfalls for them. The cost of those windfalls would shift to the poor and elderly.


In reality, the campaign is a Trojan horse concealing massive corporate tax breaks that would make our debt situation much worse.

How noble.
Posted by Teamster Power at 4:27 PM