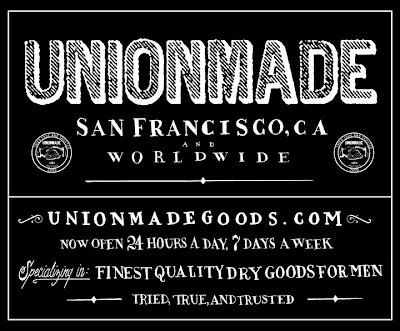 This is just low.

Unionmade is a San Francisco retailer that sells upscale men's fashions that aren't made by union members. Gawker found out about it from outraged readers:


First, we heard from a woman who emailed Unionmade saying that she wanted to buy a present for her dad, a Teamster. They informed her that, no, their goods are not actually union made—"The name UNIONMADE is an overarching concept and narrative for the store, signifying that we strive to carry well made and aesthetically timeless goods." (Ed note: We have an idea what they can do with their overarching concept and narrative.)...

There is a store (and website) in San Francisco that calls itself "Union Made Goods" (http://www.unionmadegoods.com/). As a member of a union household, I was initially excited to learn about the store, as I try to buy union-made goods as much as possible. Unfortunately, when I inquired by email whether the store called Union Made Goods does in fact sell union-made goods, I was disappointed to learn that the name is merely an "homage to a time in our history when products were crafted with care, quality, longevity, and respect to the people that made them." 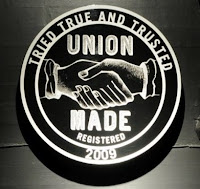 ...calling your store "Unionmade" (and modeling your logo on the AFL-CIO's) while not selling union made goods is just as asinine and insulting as calling your store "Americanmade" while selling things manufactured in China. It's blatantly misleading. It's fraudulent. It's the fashion equivalent of a TV preacher using Jesus love for the poor as a selling point to line his own pockets. On the other hand, subjugating the meaning of a real, serious political issue that affects millions of people's lives to the fact that you like the vibe of the sound of the name of it seems perfectly in character for a store that sells luxury-priced 1890s miners clothes to affluent people who will wear them while sitting inside their air-conditioned advertising agency office job.

We'll take some small comfort in knowing the store owners at least equate "union made" with "quality."
Posted by Teamster Power at 7:30 AM