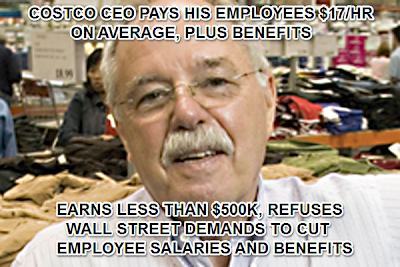 Wow, we thought Jim Sinegal at Costco was a good guy because he pays workers well, allows the Teamsters to represent them and  takes home less than $500,000 a year.

But this guy takes the cake: He gave -- yup, gave -- his three grocery stores to his employees. The Minneapolis Star Tribune has the story:


Joe Lueken spent 46 years becoming a successful grocer and community benefactor here. Finally, at 70, he's ready to sell the business, travel the world with his wife, Janice, and reap some of what they've sown...

On Jan. 1, Lueken's Village Foods, with two supermarkets in Bemidji and another in Wahpeton, N.D., will begin transferring ownership to its approximately 400 employees through an Employee Stock Ownership Program (ESOP). 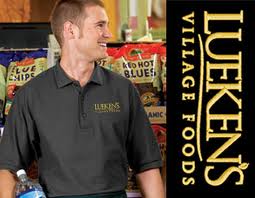 Lueken said he had multiple offers to sell to large independent chains and might have gotten more money that way. But he and his family believe that selling to workers will be better for them, the business and this north-central Minnesota city of 13,000 people.

"My employees are largely responsible for any success I've had, and they deserve to get some of the benefits of that," Lueken said earlier this week. "You can't always take. You also have to give back."

Employees say Lueken's decision, which won't require them to pay anything for their shares in the business, multiplied the high esteem they already held for their boss.

The last two paragraphs are the best:


"The whole move revolves around people, not things or money," Jeff Lueken said. "It's about allowing people to grow with the business and send their kids to college and have a great retirement, and even to express themselves at work."

The employees say it's a wonderful gift, but Joe Lueken said he's gotten more than he gave. Holding out two palms, one above the other, he said: "To see somebody go from here [up] to here is the best feeling in the world."

Posted by Teamster Power at 5:11 PM