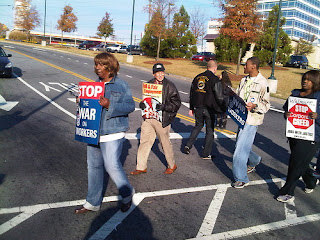 Teamsters are supporting striking Wal-Mart workers at rallies outside stores throughout the country today.

The mainstream media is doing its usual job of covering workers' protests (that is, pretty much ignoring them), so we have to hunt to find out what's going on with the Wal-Mart workers' Black Friday strike.

Tweeters tell us 400 people marched to Capitol Plaza in Prince George County, Md. Wal-Mart called the police on striking workers in Louisiana. Strikers are rallying outside a store in Milwaukee to protest low pay, scheduling and health care.

We learned from Josh Eidelson at The Nation this morning that retail workers in at least seven states, including Florida, Wisconsin, Texas, California, New Mexico, Maryland and Louisiana.


Walmart stores opened at 8 PM, drawing additional ire from employees required to come into work on Thanksgiving earlier than ever. But workers’ protests got off to an early start too. Around 7:30 PM EST, 30 workers from three Miami stores went on strike, joining 100-plus supporters for one of several nighttime rallies across the country. “It’s been so long that I’ve been working for people that had no respect for me,” Miami striker Elaine Rozier told The Nation. “They retaliated against me, and they always treated me like crap. And I’m so happy that this is history, that my grandkids can learn from this to stand up for themselves.” In the past, said Rozier, “I always used to sit back and not say anything…I’m proud of myself tonight.”

At 9:45 PM CST, workers struck and rallied with supporters outside a store in Dallas; OUR Walmart says that the peaceful crowd was dispersed by police. When workers walked off the job in Kenosha, Wisconsin, the group says that managers kicked customers out of the store on the mistaken assumption that they were there to protest. Workers are also on strike in San Leandro, California, and Clovis, New Mexico. Stores in Ocean City, Maryland; Orlando, Florida; and Baton Rouge, Louisiana each have a single worker out on strike. In St. Cloud, Florida, Walmart associate Lisa Lopez was joined by Congressman-Elect Alan Grayson as she walked out on strike.

At 11:45 PM, labor and community activists demonstrated outside a store in Quincy, Massachusetts, the first of a string of protests that allied groups promise will hit all 48 Walmarts in the state.

From Twitter we learn Wal-Mart workers are striking in Chicago,

@Sara_Jeans (Sara Shaw) tweeted the photo below: Room full of people getting ready to head out to stand with ‪#walmartstrikers‬ in the DC/MD area! 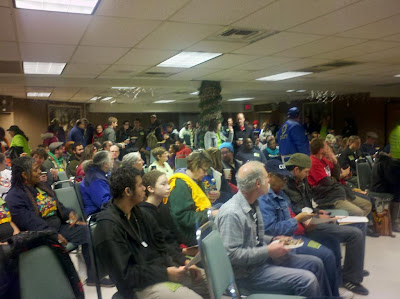 We especially like this photo of the Overhead Light Brigade in Kenosha, Wisc.: 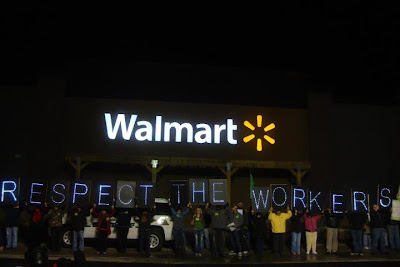