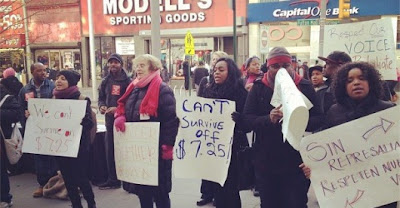 The first multi-restaurant fast-food strike is happening now in New York City today, less than a week after thousands of Wal-Mart workers walked off the job in 46 states. Steve Greenhouse at The New York Times reports,


Fast-food workers at several restaurants in New York walked off the job on Thursday, firing the first salvo in what workplace experts say is the biggest effort to unionize fast-food workers ever undertaken in the United States. The effort — backed by community and civil rights groups, religious leaders and a labor union — has engaged 40 full-time organizers in recent months to enlist workers at McDonald’s, Wendy’s, Domino’s, Taco Bell and other fast-food restaurants across the city.

Leaders of the effort said that workers were walking off the job to protest what they said were low wages and retaliation against several workers who have backed the unionization campaign. They said it would be the first multi-restaurant strike by fast-food workers in American history, although it was unclear how many workers would walk off the job.


The Bureau of Labor Statistics pegs “Combined Food Service and Preparation Workers, Including Fast Food” as the lowest-paid job category in NYC. State labor department data show the city’s fast food jobs have grown by 55 percent since 2000. Meanwhile, according to a report from the National Employment Law Project, McDonald’s profits have increased 130 percent over four years.

Show your support for New York's fast-food workers by signing the petition here.