Prediction: GOP to stick with man who says 'poopyhead' 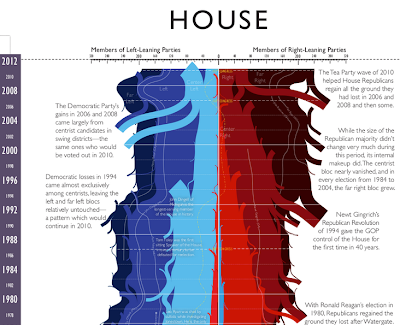 The chart above (from xkcd) shows the increasing extremism of Republicans in Congress. The bright red and blue show the number of members who are center right and center left, respectively. Darker colors show more extreme members, with darkest colors representing the most extreme.

Right now Congress is trying to come up with a new budget deal to avoid automatic spending cuts and an end to payroll and Bush tax cuts, without touching Social Security, Medicare or Medicaid. The burning question is whether the Republicans will adamantly refuse to allow the Bush tax cuts to expire. Ninety-five percent of them signed a pledge against raising taxes. The pledge was dreamed up by lobbyist Grover Norquist. If you missed it, this is what Norquist said earlier this week:


The president was committed; elected on the basis that he was not Romney and Romney was a poopy head and you should vote against Romney and he won by two points.


The modern conservative movement was founded on a marriage of principle and pragmatism. Back in the 1980s, Newt Gingrich realized that ideological purity could be a winning political strategy: by holding out for small government and low taxes, he attracted far-right groups that had been ignored by both parties for decades as well as rich donors who were looking for a new place to invest their money. His fundraising prowess, organizational discipline, cultivation of talk radio, and networking with grass-roots conservative groups made possible the Republican sweep of 1994. Over the next decade, the increasing influence of key conservative power brokers continued the purge of moderate Republicans and their replacement by extremists (note the disappearance of the bright red)....

... the conservatives lost, notably in 2006 and 2008. One possible response would have been to realize that the party had become too extreme and tack back toward the center. We know that didn’t happen, as illustrated by the dark red influx of 2010. Between principle and pragmatism, Republicans chose principle.

Why do Republicans behave this way? There are many reasons. The funding that they need to win elections comes largely from a small number of extremely conservative power brokers such as the Koch brothers. Widespread gerrymandering means that elections are settled at the primary stage, where the power of far-right groups (Club for Growth, Americans for Prosperity, FreedomWorks, etc.) places a premium on ideological purity. (For whatever reason, the trend toward the extreme has been much weaker among Democrats.)

The anti-tax platform also possesses a self-reinforcing simplicity. The vision of small government and lower taxes is clear and compelling in the abstract (even if it could be devastating in practice). The “no new taxes” pledge is trivially easy to monitor and, once broken, provides a convenient bludgeon for a primary opponent to use. It’s not a position that easily accommodates compromise.

Or sanity, for that matter.
Posted by Teamster Power at 1:00 PM