A second wave of Teamsters is right now packing trucks with hurricane relief supplies at the Red Cross warehouse in Jersey City.

Joint Council 73 President Al Rispoli arrived at the warehouse at 7 a.m. with daytime volunteers. They delivered much-needed goods to people throughout the region. They also helped with warehouse and logistics organization. Rispoli delivered supplies in Red Hook, Brooklyn. 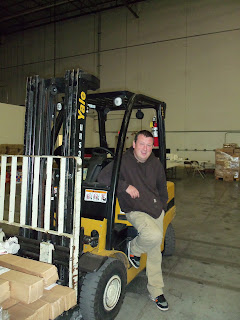 Elvin Rodriguez, a UPS driver from local 177, told us what it was like to volunteer on the Teamsters Facebook page:


I went to the Red Cross Jersey City site yesterday I drove a small truck out to New Rochelle, N.Y., with 950 laundry bags of supplies. It feels really good to be able to volunteer and give back. The Red Cross is doing an awesome job helping the victims of Hurricane Sandy. I'm spreading the word at work and hope to show up at the Jersey City building to volunteer with an ARMY of UPS local 177 Teamsters this coming Sunday. So get the trucks ready Sunday morning, 'cause the Teamsters are coming!!!

That's not all the Teamsters are doing. Our sanitation brothers from Local 831 continued the backbreaking work of cleaning up after Sandy. The Staten Island Advance reports "The Sanitation workers arrive like heroes in Staten Island's devastation zone":


New York City's Strongest are showing up in force -- with bulldozers, dumpsters, and hundreds of workers on duty at a time, clad in gloves and dust masks, doing the back-breaking work of cleaning up, neighborhood by neighborhood, in the hardest-hit zones...

Sanitation workers expertly maneuvered two front-end loaders resembling long-necked dinosaurs into the slim street. Rumbling on tires as tall as an average sized man, they scooped heaps of trash -- shattered TVs, children's toys, papers, Christmas decorations and other remnants of lives washed away -- into their jaws, and deposited the contents into a giant dumpster truck on loan from the city Department of Transportation...

While the storm dubbed Athena this week could hardly qualify as a blizzard, it added to the Sanitation Department's load in the wake of Sandy, as employees already working 12-hour-shifts were redeployed to spread salt and plow...

Since Sandy, nearly 500 Sanitation employees have been constantly on the job, with the rotation going 24 hours a day.

Teamsters from Local 812 brought desperately needed water to public housing in Far Rockaway.  The water was donated by Pepsi Cola.

The New York area will need more Teamster Power for the next week. Brother Roy Gillespie shared this request from the Red Cross:


We will be doing another push this coming week. Anything you can do to provide drivers and warehouse fork lift drivers and loaders will be appreciated. We expect the buses to run on time now that the Teamsters have helped us to find Jofaz and union drivers. The schedule will be the same or near the one for last week.

We will also need volunteers for the boroughs and Long Island Saturday and Sunday for general duties as assigned. If you or anyone else can provide a significant number of volunteers in one area we can make it all union or all one local or any way you would like to do it.

Posted by Teamster Power at 8:57 PM