This is what we union thugs do for the holidays

We give to those in need so they have something to celebrate. All across the USA and Canada.

We've been telling you about the thousands of Teamsters helping Superstorm Sandy victims get back on their feet. Thanksgiving eve, Jack Hanley from Local 802 (with help from local residents) delivered baked goods to the emergency shelter in Long Beach.

"The area was destroyed," he reported. "We brought baked goods throughout the Rockaways, too."

Local 25 in Boston just kicked off its Toys for Tots Drive. Local 117 is collecting toys for needy families in Tukwila, Wash.

And here's a story about BLET Division 28's turkey drive in Tucson (thanks, Brother John Bentley!): 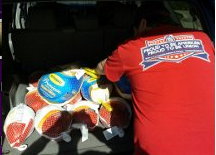 “Helping the Salvation Army is what we ‘union thugs’ do at Thanksgiving,” said Brother Sean Leighty, a member of Division 28 who helped launch the Turkey Drive.

After learning that Tucson’s Salvation Army needed donations for the annual community dinner, the members of BLET Division 28 sprang in to action to help the needy.

“They needed 500 turkeys and pies, as well as other food items, but they didn’t have anything just three weeks before Thanksgiving,” he said. “I thought, ‘I could do something to help,’ and then I thought, ‘Why not use the network of people I know and work with who are just as blessed as I am?’"

The word spread like wildfire. Several members called Brother Leighty and asked what they could do to help. He set up a collection box at the yard office, receiving many generous cash contributions from anonymous donors and also several personal checks. All told, he collected $300 in just a few days.

“I’m sure we could have raised more but I was under a time constraint because I wanted to get those birds over to the Salvation Army as soon as we could,” he said.

Brother Leighty then took his family to a local grocery store, where they used the donations to purchase the turkeys.

“We asked the store manager if we could possibly buy all of her turkeys, and her question was why we needed so many,” Brother Leighty said. “I told her that the BLET was going to donate them to the Salvation Army. She was impressed and said to take as many as we needed, and she gave us another 5 percent discount. So with her help as well, we managed to buy 20 turkeys of various sizes!”

Individual members helped as well. In addition to making a monetary donation to the Turkey Drive, Division 28 member Linda Gasser and a friend also bought four more turkeys, a ham and other food items.

It was a proud moment for Brother Leighty and the BLET when he delivered the turkeys.

“You should have seen the face of the woman at the Salvation Army,” he said. “When she asked who was donating the turkeys, I told her the Brotherhood of Locomotive Engineers and Trainmen/Teamsters. She said, ‘Wow, tell them thank you!’”

After buying the turkeys, the Brothers and Sisters of Division 28 had enough money left over to make a $75 donation to the Salvation Army. Brother Leighty thanked those who helped, saying, “There are some very generous members at Division 28.” He is hoping to do it again next year.

And remember, 'thugs' stands for "those helpful union guys and gals."
Posted by Teamster Power at 1:47 PM