Teamsters to stand with Wal-Mart strikers on Black Friday 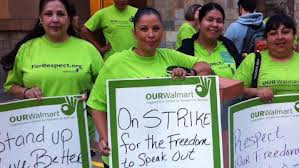 Thousands of Wal-Mart workers, tired of poverty wages and abuse, will strike on Black Friday. Teamsters will join the UFCW's "Making Change at Wal-Mart " campaign at rallies to be held outside of the stores. Our brothers and sisters at UFCW asked four our support.

Here's the latest news story about the expected impact of the strike from Bloomberg:


America’s biggest retailer may be in for an unexpectedly painful holiday season. Protesting low wages, spiking health care premiums, and alleged retaliation from management, Wal-Mart Stores (WMT) workers have started to walk off the job this week. First, on Wednesday, about a dozen workers in Wal-Mart’s distribution warehouses in Southern California walked out, followed the next day by 30 more from six stores in the Seattle area.

The workers, who are part of a union-backed employee coalition called Making Change at Wal-Mart, say this is the beginning of a wave of protests and strikes leading up to next week’s Black Friday. A thousand store protests are planned in Chicago, Dallas, Miami, Oklahoma, Louisiana, Milwaukee, Los Angeles, Minnesota, and Washington, D.C., the group says.

In a conference call with reporters on Thursday, workers who were either planning to strike or already striking explained their situation. “We have to borrow money from each other just to make it to work,” said Colby Harris, who earns $8.90 an hour after having worked at a Wal-Mart in Lancaster, Tex., for three years. “I’m on my lunch break right now, and I have two dollars in my pocket. I’m deciding whether to use it to buy lunch or to hold on to it for next week.” He said the deduction from his bimonthly pay check for health-care costs is scheduled to triple in January. In 2013, Wal-Mart plans to scale back its contributions to workers’ health-care premiums, which are expected to rise between 8 percent and 36 percent. Many employees will forgo coverage, Reuters reports.

Find out about an action near you by at the Corporate Action Network website here. You can search by zip code.
Posted by Teamster Power at 10:37 AM