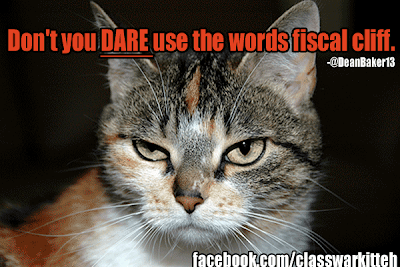 The billionaires and corporate CEOs want to cut your Social Security and Medicare over the next two months. Don't let them do it!

The peerless Dean Baker explains how they're creating a phony crisis to force Congress and the president to cut our earned benefits:


There are of course many political figures, such as the corporate CEOs in the Campaign to Fix the Debt, who are trying to create a crisis atmosphere in order to force an early deal. They hope that this crisis atmosphere can create an environment in which hugely unpopular actions, like cutting Social Security and Medicare, will be possible.

This is why you're hearing about a "fiscal cliff" and a "grand betrayal," also known as a "grand bargain."

For example, Peter Orszag, a shill for corporate welfare queen Citigroup, wrote a Bloomberg piece claiming the grown-up thing to do is to "reform" Social Security to reach a budget deal. Even though he admits Social Security isn't a real problem.

The Washington Post is just as bad. As Baker points out:


...watch your wallet kids. Guys like Orszag think they can sneak this through because nobody will be "affected" until years later and then, so what? But what will happen to you is what's happening to me: you get older and you realize that the system is insecure, that the wingnuts are carving it away little by little, and that even though you made the sacrifice to pay more and reitre later, you still stand to have necessary benefits disappearing gradually after you are too old to work. Don't buy it. This is a rich country that's creating billionaires by the bucketful and running history's most expensive military empire. We can afford for our elderly, disabled and sick to be decently taken care of. It's just a matter of priorities.