This is what we union thugs do for forgotten storm victims

Hurricane Sandy left tens of thousands of people along with East Coast without homes. Many still have no power, and places of business have been destroyed. Some members of Local 812 on Great Neck suffered devastating property damage.

Local 812 Teamsters report on their website that the greatest damage came to the coast, including members' worksites:


In Queens, Flushing Bay at one point became one with the College Point Pepsi yard. Tens of thousands of  beverage cases were lost. The Fleet shop had two feet of water; truck docks were completely covered by the bay.

That didn't stop them from helping others in need. We'll let Jim Surdi, business agent for Local 812 in Great Neck, tell the story. From an email sent yesterday:


Today the executive board did something that exemplifies what it means to be a Teamster. We delivered a truck of water and clothing donated by our members to storm-damaged Long Beach.

We delivered to, what seems, is the forgotten part of Long Beach. We went to the Martin Luther King center that, in normal times, serves as a community center and day care facility. The director of the center told us that no agency at all had been there to see them or help them yet.

This center is now serving as an emergency shelter for the community and they were in dire need of assistance. With a nor'easter coming in, they have no heat and the building had drafts and leaks that needed attention. (President) Ed (Weber) immediately had John O'Neill make calls to local politicians to get these people some help. We saw the genuine gratitude from these folks, who truly needed help. It was a proud day to be a Teamster. We have pictures that I'll send when I can.

Below, some Teamster brothers we can be proud of! 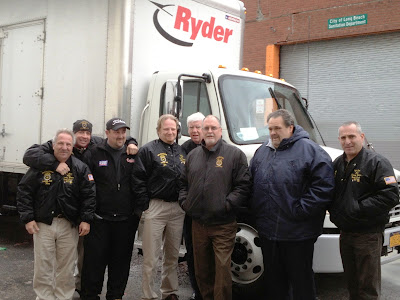 (And remember, "thug" stands for "those helpful union guys and gals."

Posted by Teamster Power at 1:06 PM