Sandy relief: 'The Teamsters are here!'

Dozens of Teamsters and their families were already at the Red Cross's Jersey City warehouse at 7:30 this morning and more were on the way to pack, load and drive supplies to Superstorm Sandy victims. Al Rispoli, president of Joint Council 73, is there, as are Teamsters from locals 63, 282, 812, 817 and 917. 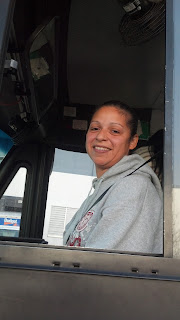 Teamsters from Local 854 (like Angela, pictured at right) are driving Jofaz buses hired by the Teamsters to pick up and drop off volunteers. More drivers are still needed today! If you can help, come by the Jersey City warehouse at 100 Industrial Drive or 1 Heller Lane in Somerset, N.J.

Hundreds of Teamsters helped out yesterday with the massive relief effort for the homeless, hungry and suffering. Brother Roy Gillespie, who's helping coordinate logistics from Washington, D.C., said there were over 100 Teamsters in two shifts in Jersey City alone. More Teamsters worked the Somerset, N.J., warehouse. Teams of UPS Teamsters worked alongside supervisors on Manhattan, Staten Island and the Rockaways. "The Teamsters are here!" echoes from Atlantic City to Long Island.

The Red Cross is updating its Flickr gallery to show how volunteers are loading massive amounts of clean-up kits at warehouses and unloading them at staging areas throughout the region. It shows the huge scale of the operation to deliver hot meals and water in devastated communities.  It shows the size of the shelters needed to house some of the 40,000 people left homeless by the superstorm.

About 100,000 families suffered losses from the hurricane and the needs are staggering. Brother Roy tells us this is a long-term effort. Hundreds of volunteers will be needed 24/7 for the next two weeks to deliver supplies in the ruined communities. Chris Jordan, who handles Red Cross logistics, is asking for families to come help over the Thanksgiving weekend. "It will be highly appreciated," said Brother Roy.

Teamsters and Teamster locals too far away to hit the ground in New York and New Jersey can contribute to the Teamsters Disaster Relief Fund. The fund will go a long way to helping our brothers and sisters hurt by Sandy. Many lost their homes.

Reuters has an update on the storm's impact:


New Yorkers took to the streets on Sunday to reinforce recovery from Superstorm Sandy, volunteering to help clean up devastated neighborhoods and using an annual Veterans Day parade to collect donations for victims still struggling without homes or electricity.

Police raised the storm-related fatality toll in New York City to 43 ... at least 121 people have perished in the storm, which caused an estimated $50 billion in property damage and economic losses and ranks as one of the most destructive natural disasters to hit the U.S. Northeast.

The Rockaways peninsula of the city's Queens borough was especially hard hit when Sandy barreled into the East Coast on Oct. 29, unleashing a record storm surge that flooded low-lying areas and fierce winds that toppled trees and power lines.

Many residents said they felt exhausted.