Red Cross warehouses, staging areas and distribution hubs are alive with more than 300 Teamsters and their families today. They're all pitching in to get desperately needed supplies to victims of Superstorm Sandy in the New York region.

"The Teamsters are kicking ass," said one Teamster member helping out in a Jersey City warehouse. More than 50 Teamsters are volunteering at that one location alone. A team of our UPS brothers and sisters are distributing supplies on Staten Island. We've had Teamster sightings all over Greater New York, and Teamster rigs from locals 817 on Long Island and 776 from Philadelphia are hauling supplies.

The news media is ignoring the extent of the damage, but it's bad. At least 40,000 people in New York alone are homeless. 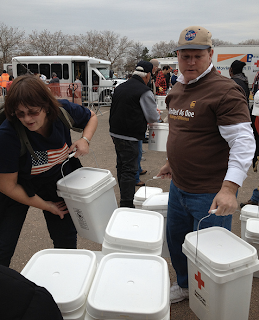 Some Teamsters spent the night in the warehouse. Some brought their spouses and children. The Teamsters rented buses to help move volunteers to staging areas and Teamsters are driving them. We've been hearing our experience in logistics (not to mention hard work) has been invaluable. Props to members from the New York City locals, and 210, 804, 707, 177, 282, 812, 817, 854, 730 and 177 who are helping out in the warehouse.

From the Red Cross Flickr gallery we spotted one of our brothers from Local 282 unloading bags of relief supplies at the Babylon, NY, town hall on Saturday morning.


The photo above shows UPS worker Darwin DeHaan passing clean-up kits along a line of volunteers in Staten Island. The Red Cross tells us the clean-up kits were so popular that the first load was gone shortly after volunteers finished unloading it. DeHaan was part of a team of UPS workers who came out to volunteer with the Red Cross.

And let's not forget our sanitation brothers from Local 831. They're still working 12-hour shifts moving mountains of debris. We'll crib a comment from Trish Conrad, who posted this on the Teamsters Facebook page:

Teamsters, you should be so proud of your bros and sisters, DSNY is busting their asses doing storm clean up around the clock. EVERYONE notices their presence and hard work. Thank you!!!!

Posted by Teamster Power at 2:24 PM