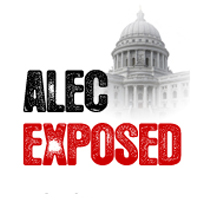 And wouldn't you know it, they were Wisconsin lawmakers who passed a predatory lending bill. You know, the same lawmakers who inspired massive protests in Madison when they tried to take away government workers' collective bargaining rights. (A judge vacated most of that law, but further court action is expected.)

Here's the story:  ALEC, if you haven't kept up, is a dating service for corporations and state lawmakers. ALEC member corporations write laws that let them gouge consumers, bust unions, shore up monopoly power and take advantage of taxpayers. They give the draft laws to lawmakers, who pass them because ALEC takes them on lavish vacations and gives them access to rich corporate campaign contributors. (In the olden days, that used to be called "bribery.")

Negative publicity has made it so embarrassing to belong to ALEC that dozens of corporations resigned in the past year or so.

Anyhoo, Rep. Robin Vos is ALEC state chair in Wisconsin, a right-to-work-for-less advocate and head of the Joint Finance Committee. He added a provision to the 2012 budget bill that legalized auto-title loans. Auto-title loans are short-term, 30-day renewable loans with very high interest rates and backed by a borrower's car title.  They are illegal in many states.

Wisconsin's Republican assembly members voted for the measure, which passed.

You know what happened next. The Wisconsin Republicans who voted for the bill then accepted $24,000 in campaign contributions from the ALEC member who most benefited from the new law -- LoanMax. Which is based in Georgia.

As Dan Bice wrote in the Milwaukee Journal Sentinel:


Wisconsin is open for business - the sketchy title-loan business.

Posted by Teamster Power at 8:01 AM